CAN WE GET A BOOK POG IN CHAT

thinks about how gems are like computers.
thinks about how they are made so there must've been like. some sort of being had to have been the one to write the Gems' Code.

was it like. the diamonds?? like i get they're the supposed rulers but it can't be because they are ALSO gems, right? Like RQ seemed to be pretty lost-in-the-sauce in the "gems cant change" train of thought, so if that kind of thing was even taught to a diamond. And like.

Maybe it was white diamond but she's a gem as well, like if she really was the one who came up with all of the homeworld bullshit then there MUST've been at LEAST someone who put her injector into the ground, y'know????

who made the gems???

What Is The Secret Gem Lore hand it over please

oh spring whats ur ideal house where would you live if life was a roblox-like infinite world with no reprocussions. 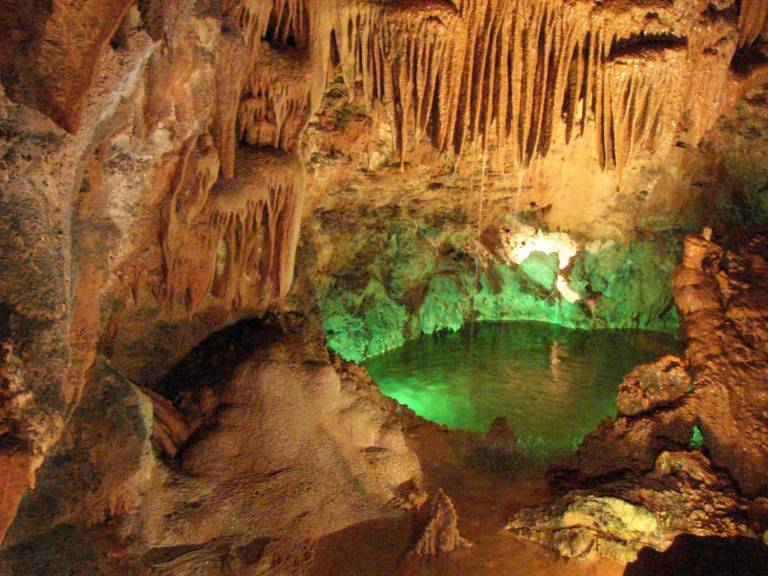 cave. i want to live in a cave. specifically??? the grutas da moeda. The euphoria of swimming in those underground pools with the knowledge that there's meters of ground above you that could potentially cave in at any moment. 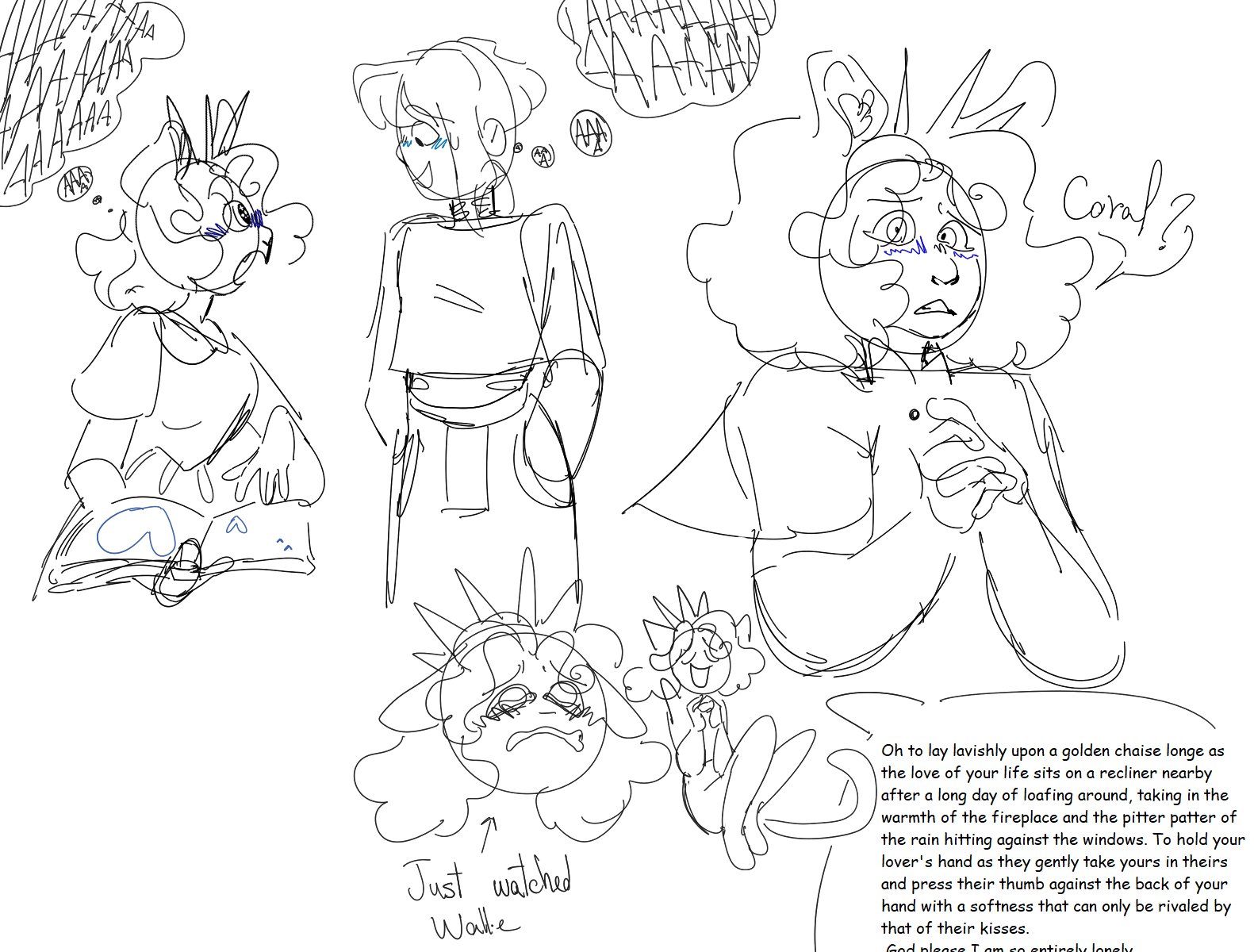 Lumina sketches :D Sometimes u are just a catgirl highly enamoured with romance novels and get a massive crush on the first real friend u have u know 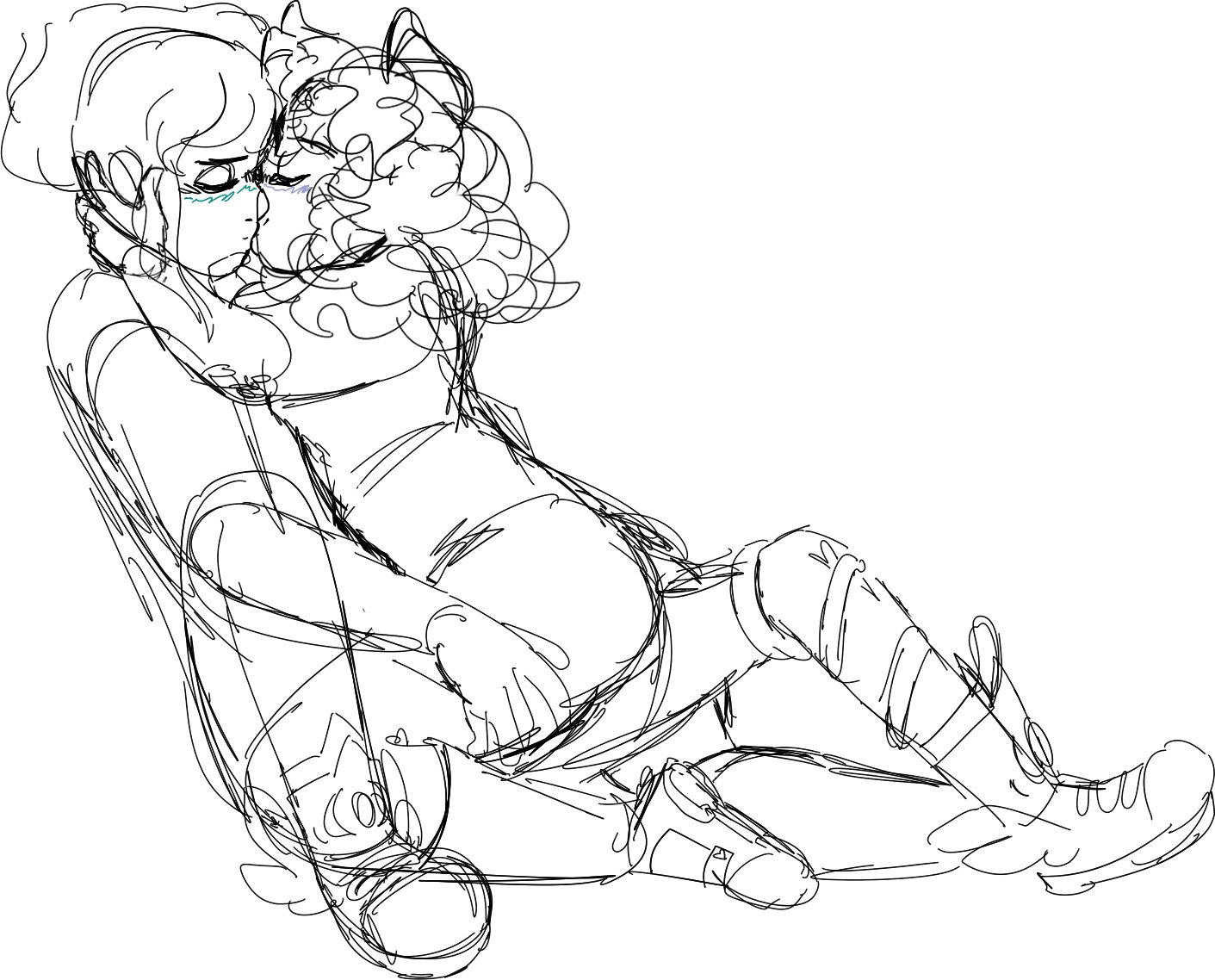 OH. actually if we DO end up needing to stay quarrantined for two weeks in fish and chips land, I can totally use up that time to watch and rewatch series ive been meaning to :} swag

And Also To Not Have To Listen To Wheatley Beforehand

i also made this post on twitter but people on deviantart making stamps dunking on simba's AU kid from the six new adventures books will never not be funny to me.

LIKE. FBDFGBSRTBVSBGSGBSFVAFD
the context for this is that a lot of kids really liked Kopa and headcanoned the cub at the end of the first movie as him, instead of Kiara, and the teens and adults in the fandom were BIG ANGRY bc of it. its just the most hilarious thing.

oh to have shitty coping mechanisms and live with your best friend whom you have a crush on in the outskirts of town and to have no clue what you want to do with your life....

did that little 5minuteartist thingy!! :} its really fun and was quick to make! Blank version is here (link) and it was originally made by @thesummerwars on twitter!
The colors are absolutely unreadable (my bad) so here's what it says in the handwriting areas (under cut)

#art tag #artists on waterfall #5minuteartist #homestuck cw #homestuck ment #furry #eye strain #ask to tag #tell me if i missed anything that might be upsetting!! #i think thats all but im not sure :o

if i write something ever and the message isnt like. capitalism kills. assume that isnt me.

the field trip we were going on to lisbon to see a van gogh thing got cancelled pensive emoji.like yea do get it but also :( bc afterwards we were going to a tim burton stop motion museum. owie

current mood is anger and sadness thinking about a kid i went to middle school with who had adhd and how we only knew he had it bc he got distracted in class and was sometimes disruptive (and how everyone was ok with him being labeled as "the annoying one" when he was a nice kid) :( , and thinking abt how my adhd was only diagnosed because the trouble I was having in class to understand things and get a passing grade was getting impossible to avoid? Even though I've always had symptoms?

Like wow people really do only care about us the second it starts being annoying to them huh. Really epic. Really cool.

Especially how when I was younger school kind of rewarded me for it?? "Oh you don't need to study? While you're in class you do the exercises ahead while the teacher is talking so you don't zone out? How smart :) Oh you have trouble socializing with other kids and hyperfixate on science? What a timid and well adjusted little girl :) Also that one boy with adhd is evil and annoying don't be like him lol" EDIT: ALSO HOW THE SECOND MY INTERESTS CHANGED FROM SCIENCY THINGS TO ART ALL OF THAT DROPPED LMAO

not to mention how til today studying still makes me feel like im a failure bc i can't catch everything in class lol. Which is goofy bc 1. of course i can't???????? no one can????? 2. can you smell the "i used to be thought of as the 'smart kid' until i crashed and burned and have pride issues"? i can lmao. big oof.

#text post #ramble #school cw #adhd #not sure what to tag this as sorry!! #ask to tag